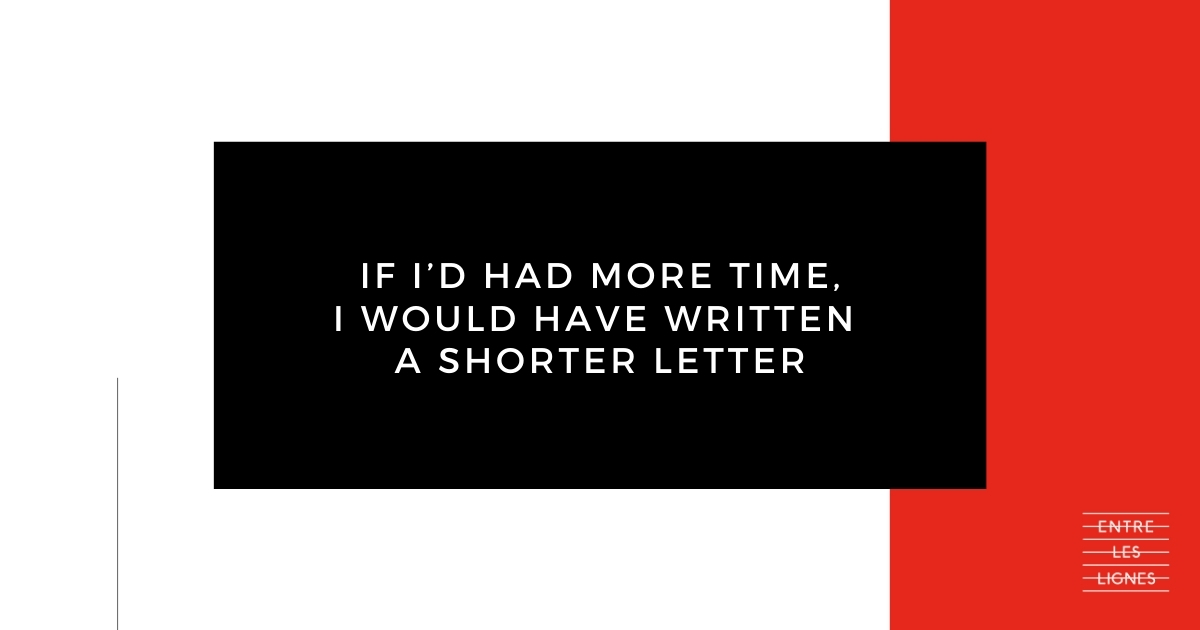 ‘If I’d had more time, I would have written a shorter letter’. Some of you may be unfamiliar with this quote, but it’s worth thinking about.

That’s because essentially, writing a concise translation can often take longer than writing long-form content. Pinpointing the precise meaning of a short translation requires thought, patience, and generally takes many revisions in order to get it right in the target language.

It’s vitally important to reflect the original meaning when working on a translation, whether the form is an advertisement copy, a blog post, or an article. With this in mind, it’s crucial the original purpose and intent of a given piece isn’t lost in the translation process, especially when you’re limited to a small number of words.

Though doing this requires a lot of skill and care, especially when the aim is to keep things concise.

Entre les lignes helps brands craft messaging across languages and cultures. Want to learn how we can help you with translation and transcreation? Get in touch today.

The pitfalls of translating short copy

Short copy isn’t synonymous with easy copy. While trying to ensure a short piece of writing remains clear and concise, every word takes on great significance in terms of the overall translation.

When translating slogans, advertisements, and copy into effective and relatable pieces, it’s easy to convolute a translation and lose the meaning. This happens all the time and there are loads of examples out there.

KFC provides us with a prime example of translations gone wrong, with their famous “finger lickin’ good” slogan once memorably mistranslated into Chinese as “eat your fingers off”!

While it’s certainly amusing to read, it would be difficult to deny the original meaning has been lost in the act of translating it to another language.

Compare that to this more successful example of a short piece of advertising copy being translated for De Beers.

Their iconic English phrase ‘Diamonds are Forever’ was similarly difficult to translate for the Chinese market as, when translated directly into Mandarin, the phrase only implies physical durability and not the other connotations it has in English, which include a sense that a diamond won’t depreciate in value and that it’ll become a family heirloom, lasting into the future. 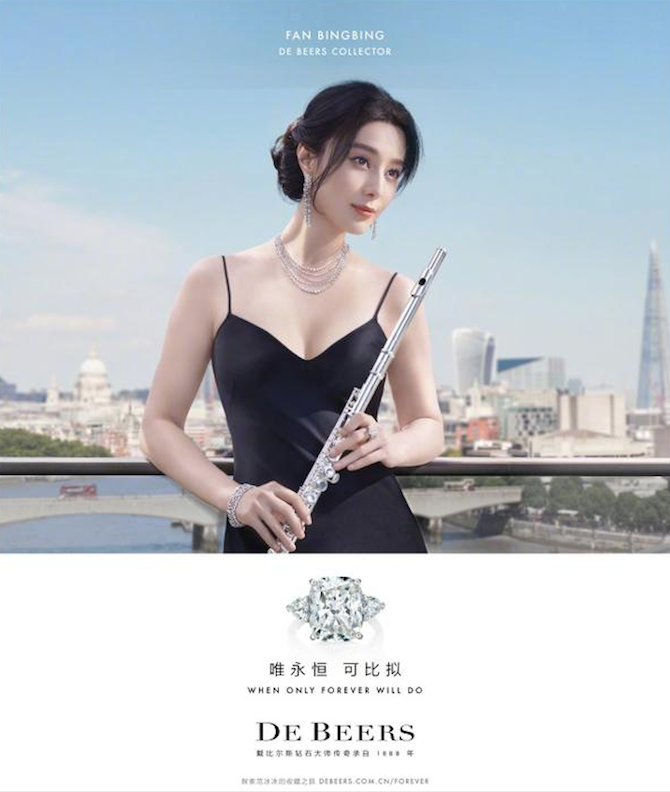 To fix the issue, the process of transcreation was applied and allowed the English phrase ‘Diamonds are Forever’ to become the Mandarin phrase ‘one diamond is forever, it can be passed from generation to generation’; in Mandarin, this phrase is lilt and delicate, much like the jewellery. Crucially, it does a much better job of conveying the original meaning than a literal translation would have.

The power behind words

When exploring the meaning behind words, it’s important to understand the semantics of transcreation. Transcreation is often defined as the process of adapting content from one language to another, while still keeping the original’s intent and meaning, particularly as it relates to cultural connotations and sensitivities.

When working with translating advertisements and copy, it’s important to keep this in mind. When you reach the root of the meaning, you’re able to tap into the reader’s emotions. If you can move the reader in any way, then your copy, advertisement, or article is going to make a difference.

Whether its purpose is to sell, inform, or educate, when copy resonates with the reader, then a mutual understanding and connection are formed between the product or service and the reader. This creates a client-customer bond that gains you valuable loyalty and develops your customer base.

The art of concise connection

The advertisement below was produced by Nike in response to Liu Xiang, a Chinese Olympic hurdler, falling and withdrawing from the 2008 Beijing 100 metre hurdle race. At the time, although it was a disappointment to the Chinese people, Liu Xaing was met with mostly positive sentiments; these are replicated in the advertisement.

When translated into English, the advertisement reads:

Who dares to put your dignity at stake

Who dares to start from scratch when you were at the peak once, at the risk of losing everything

Who dares to venture out

Who dares to fall down 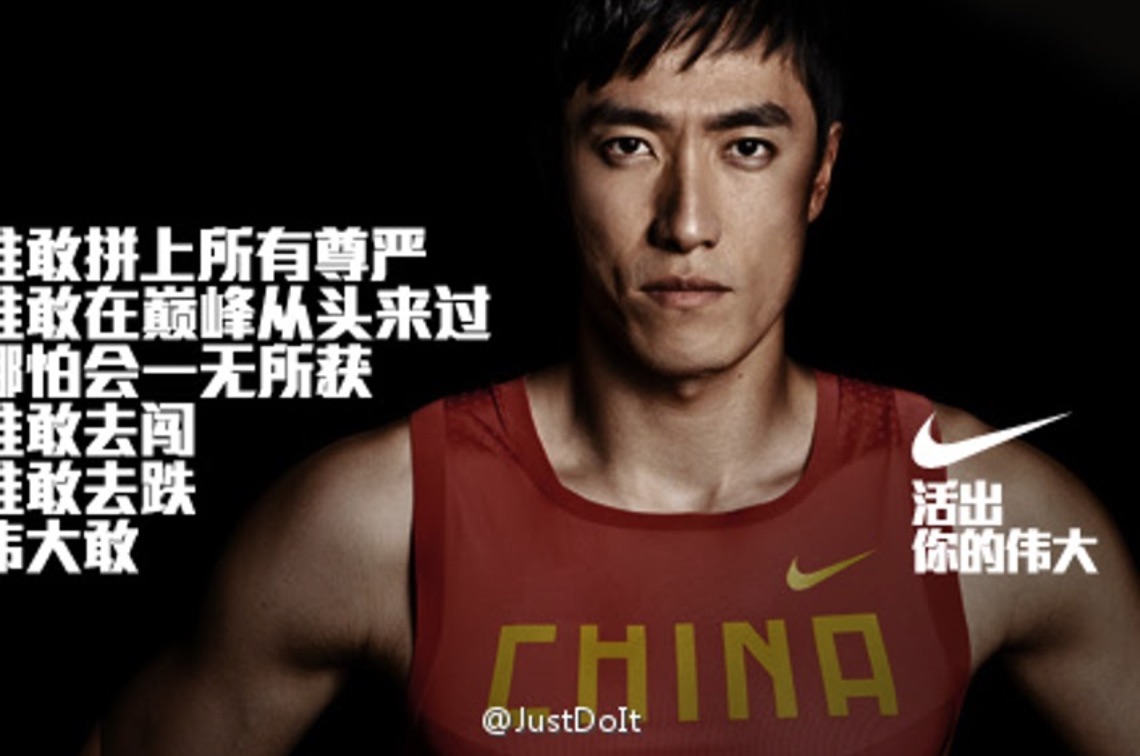 By using a beloved, relevant, and understandable symbol (Liu Xiang) at the focus, the people understood the struggles that Liu Xiang experienced; the advertisement doesn’t overlook those struggles but celebrates them. This feeling of inspiration and the idea of greatness is the thing that connects the Chinese people to a popular figure such as Liu Xiang.

Nike is the perfect example of a company understanding a country’s significant event and, using a few words, conveys a recognisable and aspirational message. By keeping the copy short and varied from the expected Nike slogan (the iconic Just do it), the audience is drawn in from the start, and as the reader goes along, their attention is captured once the message evokes feelings they can relate to.

This concise message is effective because it involves shared understanding, inspiring feelings, and creates a connection that is quick and relatable.

This translation took a bittersweet, cultural moment in Chinese society and amplified the positives. Allowing the Chinese people to connect to Liu Xiang, each other, and Nike not from a place of resentment, but from positivity and hopefulness. By keeping translations short and meaningful, you capture the heart of the message and get readers there quicker.

The connection to the message will be what the audience is moved by, and it’s this aspect you want them to relay to others. With longer copy, there is more room for varied interpretations, by keeping the copy short and concise, readers can only interpret the few words that are in front of them. If the copy is short and the meaningful message is kept, then this will be what is taken from the advertisement and will shape how they feel about your brand.

It’s easy to rely on an A.I or Google Translate, but as our founder, Tim, says: ‘Translation is seen as something that is done at the end of the chain, which can be true, but it's also the start of a new chain, and we want to be at the start of that new chain’.

Translation isn’t an afterthought, for it to be truly impactful and easy to understand, it needs to be considered throughout. Especially, if you want to include clients, if you want to make them feel something, or gain customers beyond borders, then you need to consider how to involve translation in that process. This is especially true with short translations, where every individual word choice takes on added significance.

When translation matters, the words matter, and then the meaning will shine through. To achieve effective and meaningful translations, you need to keep things concise, inclusive, and relatable. Only when the translation makes the reader feel something, do you know that you’ve succeeded.

Entre les lignes helps brands craft messaging across languages and cultures. Want to learn how we can help you with translation and transcreation? Get in touch today.