Who goes from no funds to raising a whopping $46 million and winning a Red Dot Award in just three years? And how did they bridge the generation gap and swing it internationally with a product typically favored by the 50+ crowd?

Those are all questions you should be asking yourself if you want to get to the bottom of the cowboy bike, the new e-bike that’s redefining the urban mobility equation. Want a hint? Cowboy’s secret is all about connecting and campaign accessibility.

Meet Cowboy – the Brussels-based brand that’s taking European streets by storm with its clean design, green thinking, and unparalleled grasp of what users across the global urban landscape are looking for. Sounds great, right? But start-ups with a clean, green image are a dime a dozen these days. It’s trendy, so what?

How did three young guys “convince” potential users that e-bikes aren’t just for folks with creaky joints, bad knees, and potentially… bad hair? To get a firm handle on their genius success, there are two factors that decisively land them on top.

Why sacrifice practical for pretty when you can have both?

The founders of Cowboy–Adrien Roose, Karim Slaoui, and Tanguy Goretti have been friends for a while. Prior to 2017, they’d collaborated for a stint on Take Eat Easy, one of the first online meal delivery services, featuring… You guessed it! Bikes! And… urban demand! So, the leap into e-bike country was common sense. It was also personal.

All three co-founders live in Brussels and understand the challenges inherent to urban living. They know that there’s never a shortage of traffic jams or pollution and that getting from point A to point B – even if it’s just five blocks – can sometimes take a lifetime. They also get how important image is in the city, that your ride says something about who you are.

None of the Cowboy urban mobility startup’s founders has a car. In fact, one of them doesn’t even have a driver’s license. And why would he? Everything in the city is within walking or cycling distance and heaven knows there’s more than enough pollution to go around.

And it’s that kind of insight into the merits of an e-bike over, say, a standard bike or even public transport that give them an edge. They get how valuable good transport is in a crowded city. And they get how good it feels to know you’re in control of your time.

Now, amp that up with a keen sense of design and you’ve got a product with genuine knock-em dead potential. And we’re not just talking any design, because the e-bike doesn’t just ride pretty; it’s bare-bones practical. There’s no doubt that Cowboy’s design aims for the cowboy bike are high.

Think, not just the next ‘it’ item, but a true essential, like your backpack, smartphone, or your favorite kicks.

The design is clean and minimal without ticking the rugged box too hard. Its tech is seamless and cutting edge without being ostentatious. And the ride is effortlessly smooth. You won’t find Cowboy on the list of “flash in the pan for too much bling but not enough bang for your buck” startups. The cowboy bike is a quiet anthem to simplicity, what matters in life, and what it’s like to experience freedom in fast-paced city life.

Cowboy proves that you can do pretty and practical.

Three years isn’t long for a company to carve out a neat, profitable corner in the market, but Cowboy has done it with flair. They’ve raised oodles of funds, created a community of riders, won tech awards and have been noticed and praised by online tech and startup zines. They’ve also been recognized by major newspapers around the world, like The Guardian, Bild, Le Figaro, and De Standard.

1.       Design an electric bicycle that looks good, saves time, is IoT-friendly, and is green.

7.   Invite riders to invest and triple your target on crowdcube.

Pretty is as pretty does

Cowboy campaigns are always a visual treat. There’s a perfect play of lines in every picture, whether featuring the Cowboy e-bike itself, a rider, or a combination of the two.

The colors are harmonious, with the recurring gray or black of the bike as a common thread. When they use words, they use them sparingly, but bold and impossible to miss.

They work with a lot of black and white, with an occasional bright pop of pink, a flourish of color that lets you know that while Cowboy does simple, they’ve also got a streak of sass and aren’t afraid to break the mould.

Cowboy’s success is equal parts solid product design and mind-blowingly smart PR campaigns. These days everybody knows to push their product on Facebook, Twitter, and Instagram, but here’s the thing… Cowboy didn’t push.

They reached out and talked to potential buyers in a way that underlines the fundamental respect they have for them, not just as potential dollar signs, but as people who genuinely appreciate great design, environmentally responsible mobility choices, and a solid product that promises to make their lives easier.

Instead of going the usual B2C route, Cowboy is strictly Design-to-Consumer. If you want a Cowboy bike, there’s no long search for a dealership nearby. Instead, you contact them directly and arrange to take it out for a test ride.

Everything is personal. Questions about a feature? Want to know if you can tweak it? Need a general walkthrough? The Cowboy team tells it to you straight – the people who know.

When you take the streets, you don’t take them alone

The killer visual design of Cowboy’s PR campaigns and word-of-mouth have catapulted Cowboy sales in record time. The cofounders have ingeniously woven both elements together to create a bona fide Cowboy community. If you want to see that in action, just check out their Take the Streets campaign.

In 2019, around a hundred cowboy bike owners took to the streets of Brussels on Car-free Sunday to show off their wheels, give a shoutout to the environment, and have a drink together after. Potential users who showed up to the event in cities across Europe got to take the bike out for a test spin, ask questions, and order directly.

Your story is their story too

The brand takes ambassadorship to the next level. Where most brands hope for word-of-mouth advertising – customers who gab effusively about how great their product is – Cowboy blurs the line between the brand and the users’ identity. Early users were involved in shaping the brand image in two ways:

1. Visually – search for @cowboy_hq on Instagram. The people posing on or next to the stylishly chic cowboy bike aren’t just hired models, but owners. From a design perspective, they’ve cleverly coalesced user and product to market Cowboy as diverse and down-to-earth. 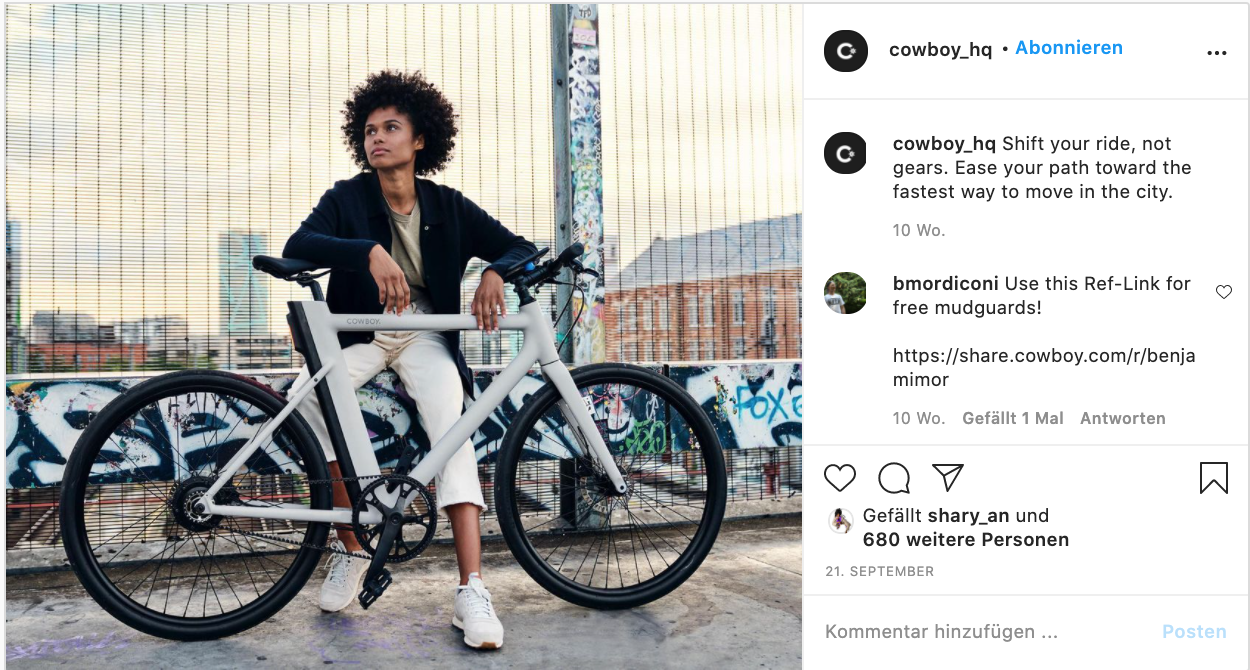 2. Storytelling – users initially had a chance to help shape the brand by telling their stories. Every rider’s story becomes part of the larger Cowboy story.

Instead of gushing ambassadors, you get a glimpse into people’s lives, find out what they love about the cowboy bike, and what drives them, makes them unique. And you’re instantly hit by how diverse the users are.

Several share Cowboy’s entrepreneurial streak, but there’s also a single mom and businesswoman, an Olympic athlete, an IT guru, and a “creative rookie”.  It’s a creative way of amplifying their appeal, building a sustainable base, and selling the idea that user + design is a dream aesthetic in itself!

Say it with style

I didn’t catch that, could you speak up?

Breaking out of Belgium and onto the international scene was something Cowboy did with astonishing speed. Was it sleight of hand or was it simply that their customer demographic shares several key traits? For example, cowboy bikes are being snatched up like hotcakes by urbanites, the environmentally conscious, and people who prefer to travel in style. But is that enough?

While it’s true that there is a shared international factor, the metropolises of Rome, Berlin, London, Paris, and Madrid all have unique cultures, a specific vibe (depending on the quarter you’re in), and… there’s language.

Every word of their copy—in their original and translated versions—shows the same care for design and connection.

The cowboy bike design translates just fine on any big city’s streets. The right turn of phrase in marketing campaigns, however, is something else altogether.

It’s been said before, but let’s say it again – Cowboy is all about design. And the brand’s design extends beyond clean and crisp visuals and the smooth lines and planes of the bike. It’s crafted into the language of their campaigns too. (Right about now you should be trying to conjure up your best image of Dirk Gently because yes, “everything is connected”.) 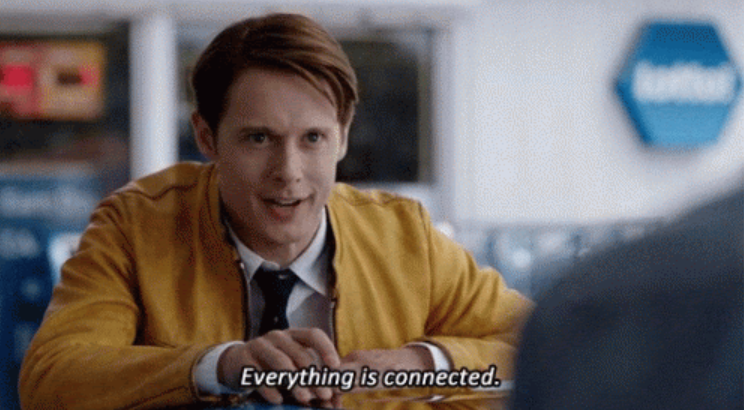 And that is no easy feat.

Lost in translation? Better hope not!

Call it serendipity or just plain ol’ good timing, but around the time Cowboy got ready to take things international, a Brussels-based translation company called Entre Les Lignes came knocking (yes, that’s us!). Cowboy already had a genius English copy editor on board, so our job was to reflect the tone and content in the Dutch, French, and German without losing the inherent schwung of the original.

Every aspect of Cowboy’s design is calculated down to the wording of their campaigns. The phrasing is crafted to convey the Cowboy brand’s identity perfectly. It has to be clean, no-nonsense, elegant but not uppity, and simple. The thing is, how you convey that in another language is not as easy as flipping open a dictionary and miraculously landing on the right word.

Need an example? One of the original bright pink catchphrases is, “Earn your street tread”. It’s a play on words that puts the bike (and its wheels) front and center. It’s also impossible to translate literally. The only thing to do is come up with an approximation that captures the core message – and makes it catchy.

Buckle down, do the work, and reap the rewards

Getting that right is a process, one that involves briefings, multiple feedback rounds, and a solid understanding of the goals of the branding campaign. In this case, the team translator brought an innate understanding of the brand and the feelings the message is intended to evoke. Their job was to resonate with the target audience, know how they think and pull strings like Machiavelli with their words, whether in Dutch, French, or any language.

And so far, Cowboy and Entre les lignes have pulled it off. The language design carries, and the cowboy bike can now be seen on the streets of nine different countries. There are loads of studies out there on how a person’s mother tongue speaks on a visceral level that another learned language can’t. By factoring language into their design equation, Cowboy made the right call. It’s a brilliant D2C strategy that proves that Cowboy users come first.

Your take-home bag of tricks

No marketing campaign is guaranteed to be a success, but the Cowboy urban mobility startup sets some clear, achievable standards to get you there.

If you need help with #3, keep in mind that at Entre Les Lignes, we’ve handled the translation and multilingual aspects of global PR campaigns like this one. Need to expand internationally? Get in touch with us today.